Valve shrouding may be something you have heard of (or maybe not), but it and its effects are closely tied with both the seat and port design that works best.

This Tech Tip is From the Full Book, DAVID VIZARD’S HOW TO PORT & FLOW TEST CYLINDER HEADS. For a comprehensive guide on this entire subject you can visit this link:

So what is valve shrouding? It is easier to see from a drawing than to explain, so take a look at Figure 9.2. When you have absorbed this concept, move on to Figure 9.3. This is the intake valve in the intake side of the infamous Weslake A-Series engine combustion chamber that I talked about in the Introduction. The point to note here is that the walls of the chamber are, for much of the valve’s circumference, close to the edge of the valve. So this setup shrouds that part of the valve, and flow is limited around that particular section. The green line represents the radius of the stock chamber wall, and the airflow produced by this is shown by the green line on the graph. Obviously, we cannot cut the chamber away where it is adjacent to the bore diameter (gray line), but elsewhere we can cut it to alleviate the shrouding.

Fig. 9.1. As exotic as this head for a 7-liter Corvette may look, it is not without a basic problem: valve shrouding.

All this talk of shrouding raises a question: Is it possible to have zero shrouding within a head that still utilizes the largest valves possible? A hemi-style combustion chamber can provide just that. And it does so because the valves are always moving away from the cylinder wall as they open.

Fig. 9.2. On the left is a totally shrouded valve. This doesn’t happen in practice, but it demonstrates what shrouding is. No air passes by the head of the valve because it is completely enclosed by the chamber walls. By pulling the chamber walls away from the valve’s circumference, as on the right, air (green arrows) can pass freely around the valve head.

Fig. 9.3. On the left is a drawing of the infamous A-Series 850 Mini head. This so-called magic combustion chamber from Weslake suffered acute valve shrouding. Progressively cutting back the chamber as shown here produced an initially marked increase in flow but, as the graph on the right shows, subsequently diminishing returns. This is exactly as you would expect. 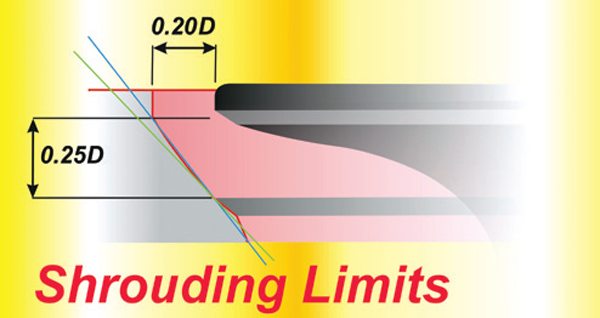 Fig. 9.4. We can say a valve is geometrically and fully de-shrouded when there is a clearance around the valve head equal to 0.20D at 0.25D lift. This equates to an angle, for the combustion chamber wall, of 36 degrees from vertical.

Fig. 9.5. We can do little to remove shrouding caused by the bore diameter (red), but chamber shrouding (green) can be effectively minimized. 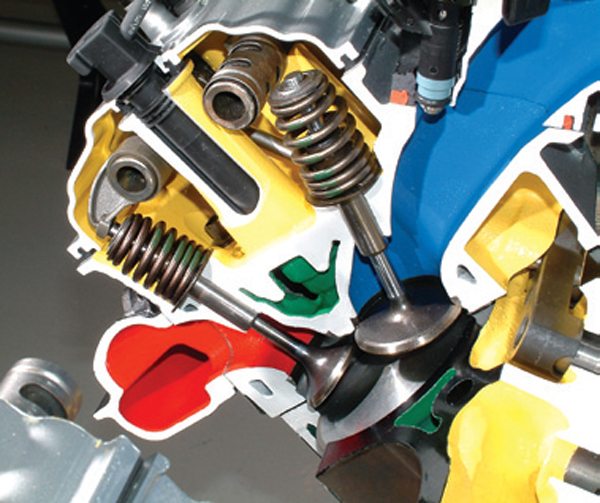 Fig. 9.6. The latest Chrysler Hemi engine is the latest high-tech design. In stock form the heads flow as well as many good aftermarket heads for the small-blocks from GM and Ford. In ported form, they rival a set of $10,000 Cup-Car heads. 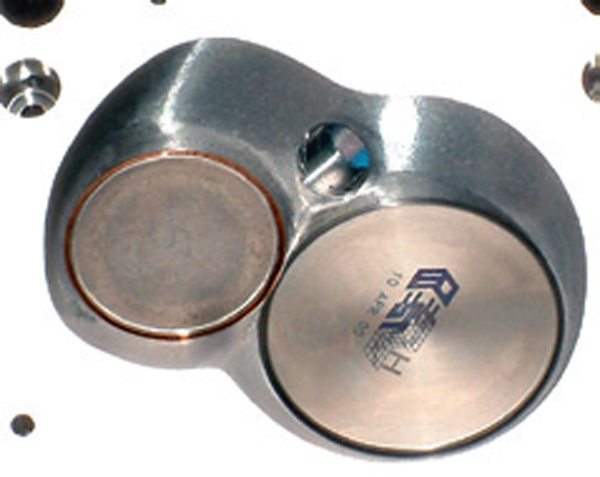 Fig. 9.7. A lot of effort went into minimizing shrouding on this D3 Ford Cup Car head from Ultra Pro Machining. The result of this and other intensive airflow work is an 850 hp, 5.8-liter, 358-ci pushrod engine equipped with a single 4-barrel carb. 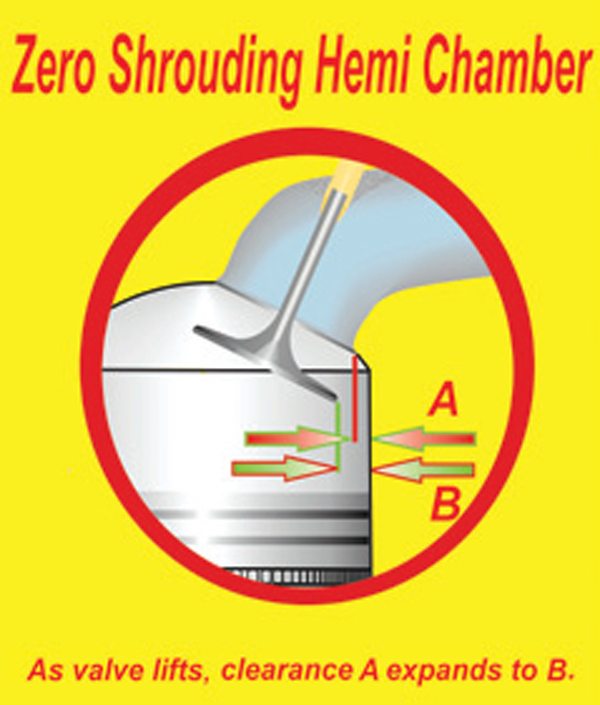 Fig. 9.8. A hemi-style cylinder head has zero valve shrouding. This comes about because as the valve opens, the distance from the edge of the valve to the cylinder wall increases from A to B.

Fig. 9.9. This small-block Chevy Dart CNC-ported head is a good example of shrouding reduced to a minimum. The red and the blue lines represent zero shrouding. Only the cylinder walls cause any shrouding.

Fig. 9.10. Air does not enter the cylinder evenly all around the intake valve. Here, better than 60 percent enters via the valve’s “A” half. This means the “B” half is in less need of de-shrouding. Note: the flow exiting the valve is turning, thus generating swirl.

Many World War II aircraft engines had a hemi-style combustion chamber. These typically employed valve angles of as much as 90 degrees inclusive. This accommodated the biggest valves, but it also produced a very deep chamber (a hemisphere). Deep chambers were okay for the low-compression ratios used for heavily supercharged engines but were bad for high-compression use because of the high piston dome needed. In practice, it turns out that about the optimum angle for the intake valve from the bore centerline is about 18 degrees. For the exhaust, where shrouding is less important, the optimum angle is approximately 10 degrees.

Chrysler has been synonymous with Hemi engines from the 1950s and with good effect. It introduced the 5.7 in 2003 and a 6.1 version came later. The engine is a very-well conceived design, with heads that flow every bit as well as you expect a good design to do.

So far I have referred to “geometric” shrouding. It’s a good start to understand what shrouding is, but simply applying it without further thought about what might be going on may not be the way to go. If air entered all around the valve in a uniform fashion, geometrically de-shrouding the valve works every time. However, air is heavy stuff and tends to flow in a straight line. There is no point in de-shrouding a portion of the valve’s circumference if there is minimal flow there. So we must first understand where the deshrouding needs to be done to make the most use of material removed from the combustion chamber. This can be important; for every cc carved out less compression-ratio potential is available.

Written by David Vizard and Posted with Permission of CarTechBooks 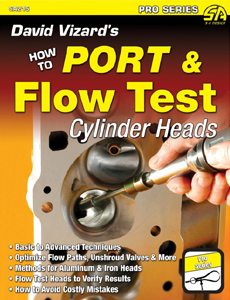 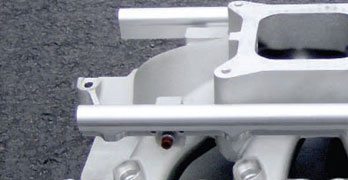 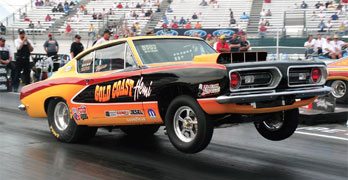 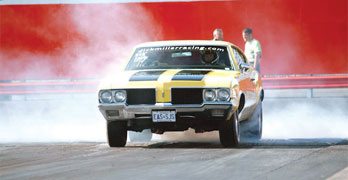 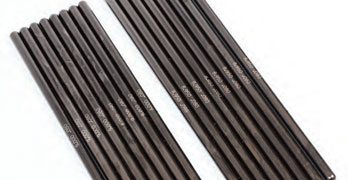 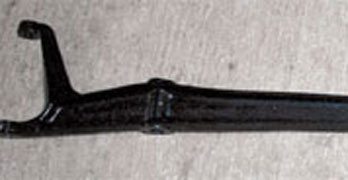 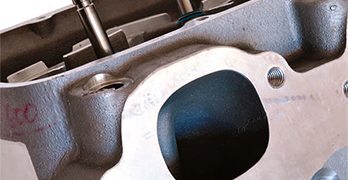 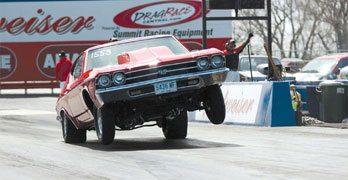