A bold chapter title to be sure but, before going into the fundamental principles of what makes horsepower, let us look at the definition of horsepower. This seems a necessary step because, too often, novice enthusiasts are unaware of how horsepower is defined and derived.

This Tech Tip is From the Full Book, DAVID VIZARD’S HOW TO BUILD HORSEPOWER. For a comprehensive guide on this entire subject you can visit this link:

The definition of 1 hp was determined by British engineer James Watt of steam engine fame. After suitable tests, he set the value of 1 hp to be 33,000 ft-lbs per minute. That means either lifting 1 pound through 33,000 feet vertically in one minute, or 33,000 pounds through 1 foot in one minute, or any combination that multiplies out to 33,000. From this, we can say:

where “work done” is the force involved (in pounds) and the distance (the number of feet) that it acts over in one minute. This is expressed as foot-pounds of work done per minute (not to be confused with ft lbs of torque). 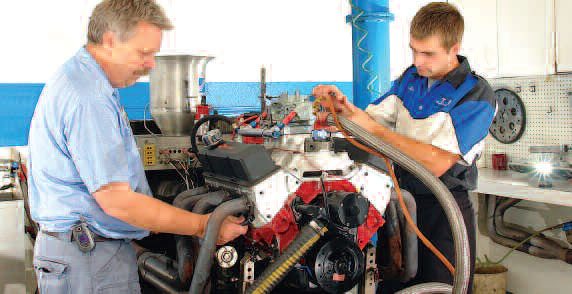 But an engine does work rotationally so we need to translate the work done in a circle to the equivalent of a straight line. To do that, we multiply the crank radius (R) in feet by PI (3.142), then 2, and then multiply that by the force (F) in pounds as generated by the cylinder pressure and the revolutions per minute (RPM) involved.

But R x F equals Torque, so we can simplify this equation to:

In other words, we can divide the 2 x 3.142 x Torque x RPM on the top line by the 33,000 on the bottom line. This gives us (assuming English units) the universal formula for horsepower, which equals: 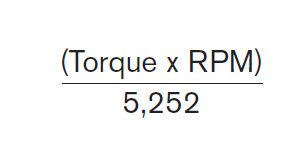 So now that we know how horsepower is derived, let’s look at how we actually measure it. For this we use a device known as a dynamometer. A dyno, which applies a braking force to the engine (hence, the term brake horsepower),does not directly measure horsepower but derives it by measuring the torque the engine can make at a particular test RPM and then calculating the power from these two known values. Power (as opposed to horsepower) is simply torque x RPM. To express the result in units of horsepower, it has to be divided by a constant. From the previous formulas, you can see the constant involved is 5,252. For example, a power calculation looks like this, if an engine produces 200 ft-lbs at 3,500 rpm. The formula is:

Double the torque at that RPM, and the power doubles. Doubling the RPM, but without changing the torque, also doubles the power. Therefore, you can see that any change in torque at a given RPM also changes the horsepower at that RPM. 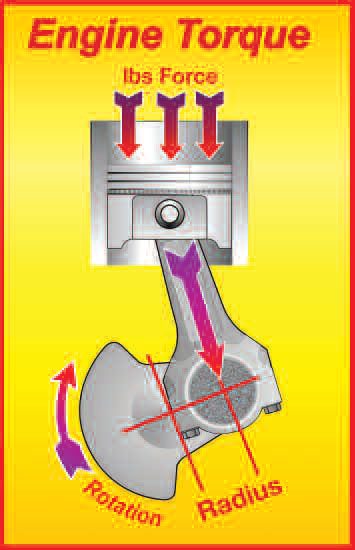 Here is how an engine develops torque. As the piston goes down, the bore pressure drops and the torque follows suit. Multiple cylinders, the mass of the engine’s internals, and a flywheel tend to damp-out torque fluctuations. 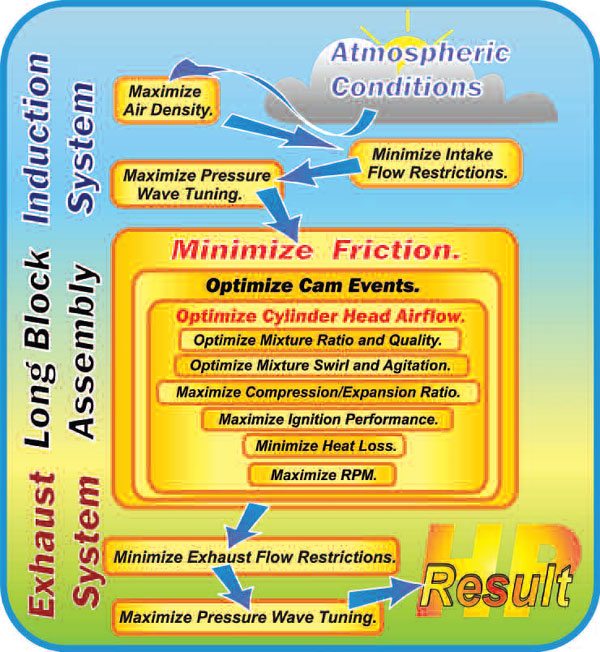 1-1. Here, you see the basics of every speed secret known to humankind, and plenty that are not. It covers all the basic elements we need to improve to build more power. In the following chapters, we tackle each of the elements shown in more detail, starting with the factors at the top of this chart and finishing at the bottom.

Engine torque is exactly the same as the torque produced with a torque wrench (Force x Radius). In the case of an engine, the radius is half the stroke and the force is the average produced by the gas pressure pushing down on the piston. The gas pressure is the result of filling the cylinder with air and then heating it by burning fuel in it. Here it is worth taking a mental note of the fact that we only have atmospheric pressure (14.7 psi at sea level) to work with to fill a cylinder. This factor puts a limit on how much torque an engine can develop unless forced induction (a supercharger) is used. For an ultrahigh-compression, normally aspirated engine (no means of mechanically boosting the intake charge), something a little over 1.65 ft-lbs per cube (101 ft-lbs per liter) is about the best that is currently being achieved. With the aid of some type of efficient supercharger, the torque per cube can be doubled, tripled, or even quadrupled, but there are consequences, which I deal with in Chapter 5.

Now we know what torque and horsepower are, so let us look at what it takes to make as much as possible of both these factors. Chart 1-1 shows all the elements that affect the engine’s final output. But everything has its limits, and before we go on to discuss how best to increase engine output, it serves us well to understand what limitations we may be faced with.

You may have heard it said that an engine is nothing more than a simple air pump. Reduced to basics, it can be looked upon as an air pump, but the reality of producing horsepower means that it is hardly simple. A much better description is that it is a complex thermodynamic air pump. If high output is sought, the first aspect we need to pursue is the production of torque, closely followed by all the means possible to raise the RPM to where that torque occurs. Just how much torque an engine makes is governed by the weight of charge inhaled in one working cycle. We can increase that charge weight by making the engine bigger, by supercharging it, or both. At first thought, making the engine bigger by virtue of a bigger bore and stroke seem like a process that can be carried on without limits other than the sheer size of the final engine. Therefore, if you doubled the displacement of an engine, you may think that the output would double. Unfortunately, things don’t work out that way. 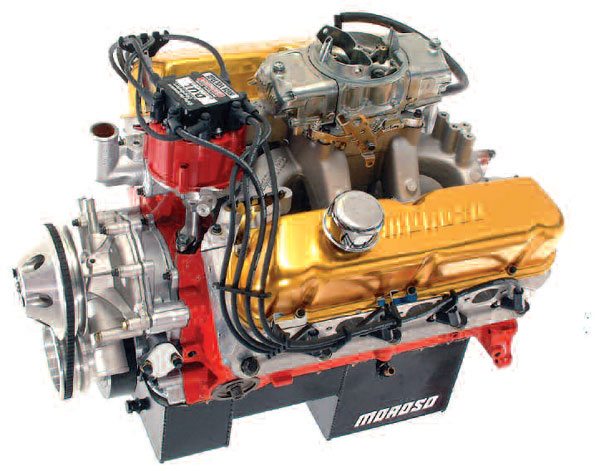 I stretched this Ford Windsor engine from its original 351 to 425 ci by means of a 0.6-inch stroke increase and a 0.060-inch overbore. To make the most of this capacity increase, it was necessary to change valve events and lift to more appropriate values.

As the engine’s cylinder proportions are increased, it becomes harder to extract a proportional increase in power. Just after World War II, it was considered that, in normally aspirated form, 125 hp per cylinder was about the limit with the materials, oils, fuels, and technology then available. These days, better materials, modern fuels and oils, flow benches, and valvetrain dynamics have allowed the 125-hp figure to be exceeded by a big margin. Currently, a good V-8 Pro Stock “mountain motor” in the 825-or-so cubic-inch (13.5 liters) range can put out about 200 hp per cylinder. But it hasn’t, nor will it ever, come easily. The reason for this is largely a question of proportions and geometry. It is better, if designing a given size engine from scratch, to have a lot of smaller cylinders rather than a few large ones. At first this seems less than logical, so let’s go through some clarification logic. 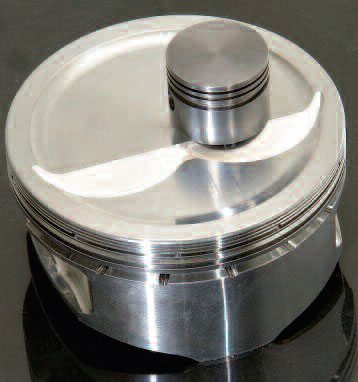 I tried to dig up a big 5-inch aeroengine piston for this shot, but all I had at hand was a 4.185 small-block Chevy piston to compare with the 1.250-inch-diameter piston from a gas-powered lawn trimmer. Big pistons may look good, but you need to remember that the cylinders they reside in are far harder to fill than small cylinders. 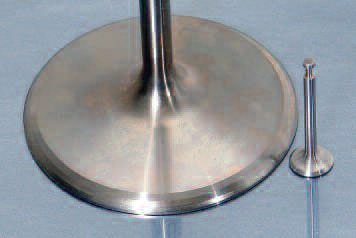 Here is the intake valve from a 1,050- cc-per-cylinder Pro Stock engine compared to the valve from a 23-ccper-cylinder engine. Given all the same proportions, the small cylinder with its small valve breathes easier than the big one. 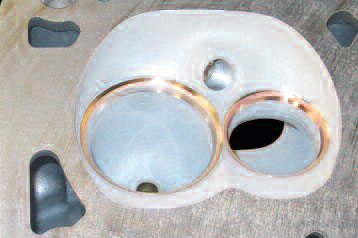 The bigger the engine, the more important heads become. This CNCported head has the biggest valves possible. It also has thermal barrier coatings to keep the heat out of the intake charge in the port, and in the burning charge in the chamber.

Even if all the engine’s proportions remain unchanged, it is more difficult to fill a large cylinder than a proportionately identical but smaller cylinder. Here is an example to illustrate the situation: Assume we have a 180-ci (3-liter) one-cylinder engine as a starting point.

Let us also assume that this engine has what is a fairly typical bore/stroke ratio of 1.2:1 (bore is 1.2 times the stroke) and the intake valve is 50 percent of the diameter of the bore. If this 180-inch engine has just one cylinder, the intake valve would be 3.252 inches in diameter, the valve’s area would be 8.306 square inches, and its circumference would be 10.22 inches. For a cylinder head equipped with this valve to breathe effectively at the cylinder’s limiting RPM, it would need a minimum lift of about 0.980 inch (25 mm).

If our 180-ci engine obtained its displacement from eight proportionally similar cylinders, the intakevalve diameter would be 1.626 inches. In this instance, the combined area of all eight intake valves is 16.612 square inches and the circumference is 40.88 inches. The lift needed to get near-maximum flow is only about 0.487 inch. This means the eight small cylinders of 180 ci have approximately twice the breathing power of one big cylinder of 180 ci, even though the valve and bore proportions remain unchanged. Also, if we assume 5,000 feet per minute maximum piston speed, the maximum RPM of the one cylinder engine is 5,500, where it is 11,000 for the eight-cylinder engine. There are other factors involved, but from this you can see the reason it is harder to extract power from big cylinders rather than a greater number of small ones. You can also get an idea of how, ultimately, these and other limitations call a halt to the amount of power that can be had per cylinder.

Since most of us build an engine using an existing block, rather than designing from scratch, understanding these limitations allows moves that help optimize what can be done within the constraints of a set number of cylinders. It is often said, and rightly so, that a successful engine is the sum of a parts collection that is the right combination. What often defeats many engine builds is the fact they are not an orchestrated combination. 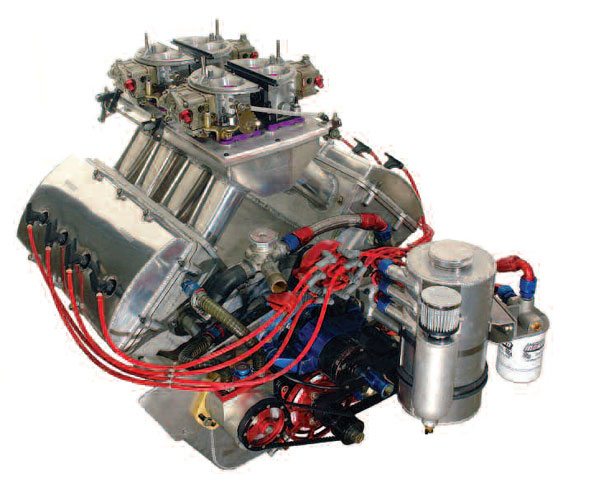 This Jon Kasse bigblock Ford displaces a massive 900 ci (15.1 liters). The output from this 6-inch-stroke gasburning behemoth is around the 1,700-hp mark, with torque just short of 1,600 ft-lbs.

Written by David Vizard and Posted with Permission of CarTechBooks 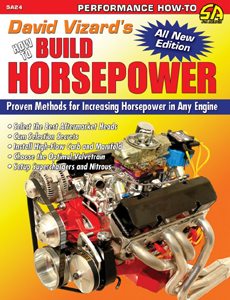 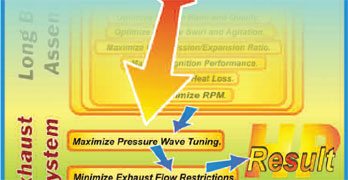 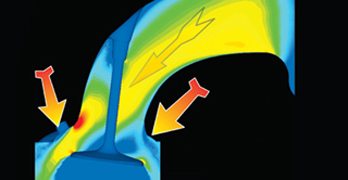 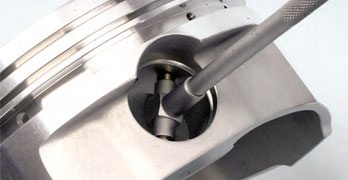 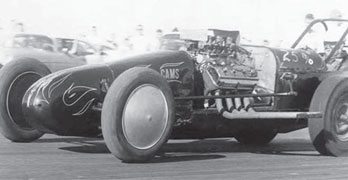 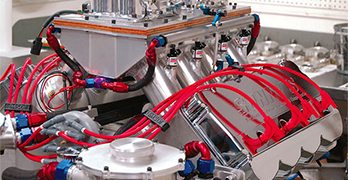 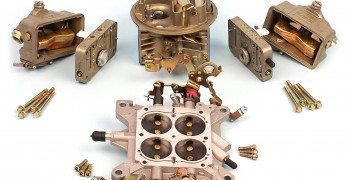 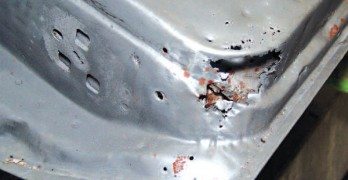 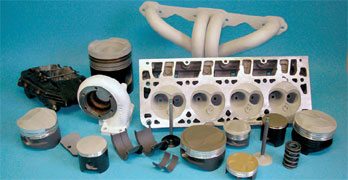 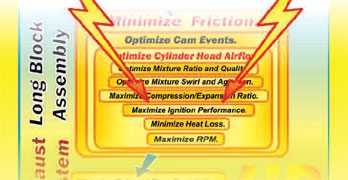 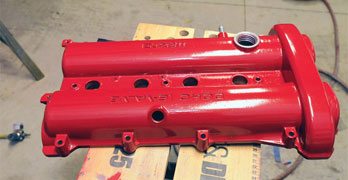