If you can tune a carburetor, you can tune EFI. Every single component of a carburetor has its counterpart in the tables of modern EFI systems. Many die-hard racers swear by their trusty old double pumpers and it’s tough to argue with results.

This Tech Tip is From the Full Book, ENGINE MANAGEMENT: ADVANCED TUNING. For a comprehensive guide on this entire subject you can visit this link:

The reasoning is dead simple. Carburetors by design MUST deliver an amount of fuel directly proportional to the velocity of air flowing through the venturis. Let’s start with the fuel side. Obviously, a pump is required to transport fuel from the tank to the carburetor, but the side effect is a lightly pressurized feed to the bowls. The bowls of a carburetor act much like a water tower. The higher the level, the more pressure we get—even on a relatively small scale. If we introduce a hole near the bottom, we get more pressure if the level above this hole is higher or if there is added pressure on the liquid itself. Controlling the size of this hole (jet size) controls the flow rate of the fuel once something begins to draw from the bowls. 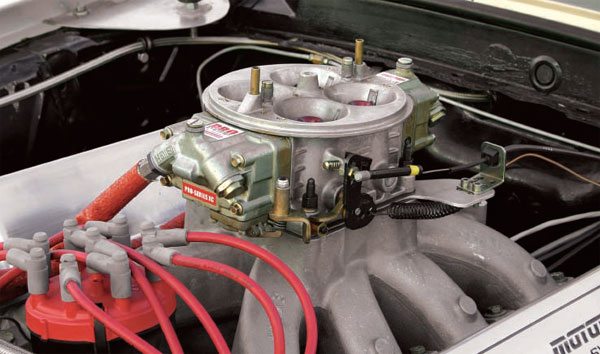 A typical four-barrel carburetor as installed on a single plane manifold. This arrangement is best suited to high RPM operation. (Nate Tovey)

The venturis of a carburetor act exactly like the wings of an airplane. As the velcity of the air increases in the smaller diameter of the venture, Bernoulli’s Law states that the pressure must drop. This yields a lowpressure zone immediately outside the fuel discharge. This pressure differential is what draws fuel from the bowls into the engine. Since both the venturis and the fuel discharge are fixed in size, their flow ratios are also fixed. Very simple: more pressure drop equals more fuel flow. 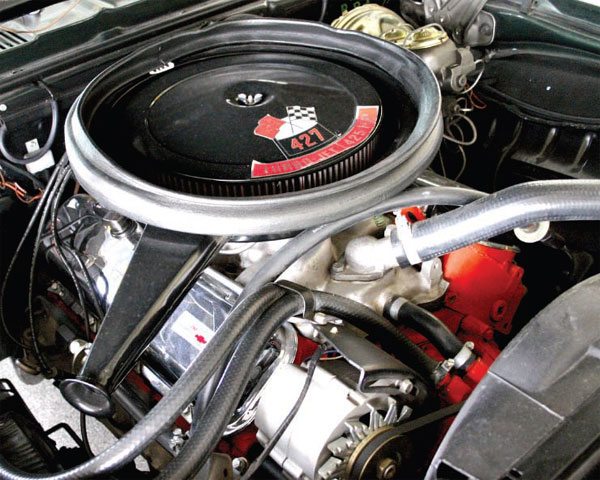 Above: State of the art, circa 1969. The 427-ci Copo Camaro was the epitome of musclecars of the era, and the inspiration for today’s Z06 Corvettes. (Nate Tovey) 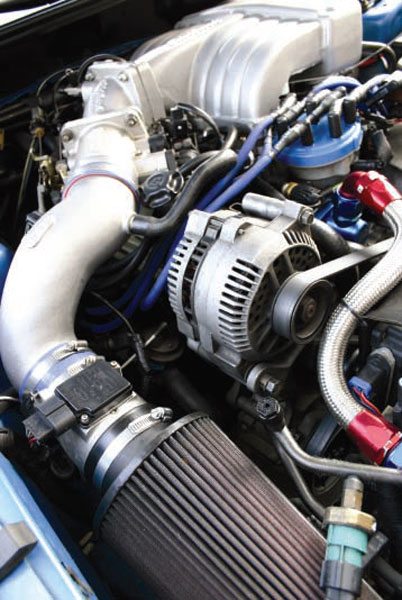 The “dry” intake tract of a modern fuel-injected engine shown from filter to throttle body to manifold. Fuel is not added until just before the air enters the cylinders, allowing for more convoluted path design without puddling. (Nate Tovey)

Fuel flows from the bowls, through the jets, and out into the venturis of the carburetor. The smaller area of the venturi creates a low-pressure zone that draws fuel into the air stream. (Nate Tovey) 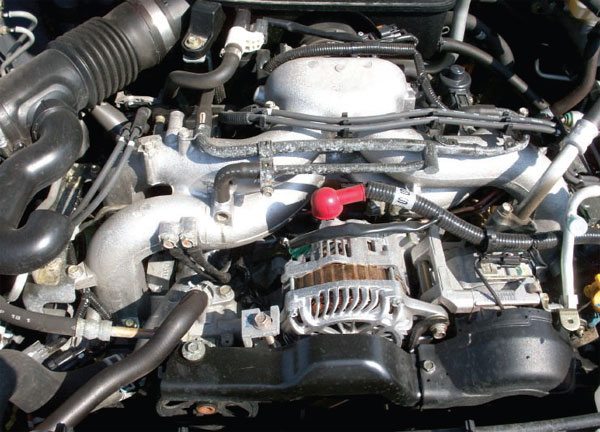 The biggest compromise here is that, other than at idle where the mixture screws have enough authority to change things, we are locked to one flow ratio of air to fuel for the primary circuit and one flow ratio for the secondary circuit, if so equipped. This means tuning a carburetor often boils down to a compromise of desired air/fuel ratios between cruise, light throttle, and wide open throttle (WOT). With crude adjustments at best to control transition and no real way to adjust for nonlinear performance across a wide RPM range, there is room for improvement. Additionally, since actual fuel flow is proportional to air velocity in the venturi rather than actual air mass flow, air/fuel ratios can change slightly with changes in ambient conditions. The term “good enough” works for many racecars, but leaves a lot to be desired on a daily driven car expecting good economy and emissions.

The trusty old distributor is a reliable, but crude method of controlling ignition lead. Assuming that there is little play between the crankshaft and distributor, static ignition phasing is easily controlled allowing for accurate timing of the spark event relative to piston position. However, automotive engines are not static devices. Increases in engine speed mean less actual time between crank angles, so ignition advance must increase just to maintain the same amount of burn time between the first spark event and TDC.

On mechanical distributors, this increasing advance is accomplished with a set of rotating weights secured by springs. Adjusting the mass of these weights and the tension of the springs gives a crude adjustment to the phasing of the distributor’s shaft relative to the crankshaft, advancing ignition timing at higher engine speeds. 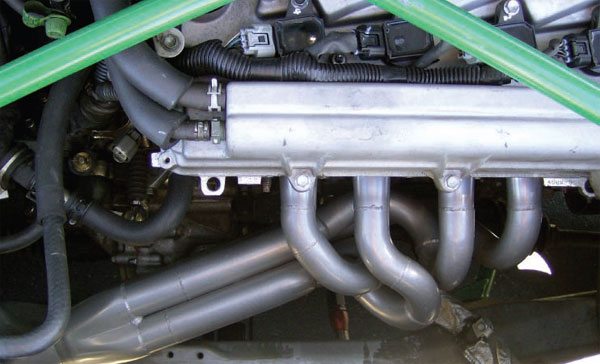 Ram tuning can work on both the intake and exhaust side of an engine. The tuned header on this Toyota MR2 greatly improves exhaust scavenging. 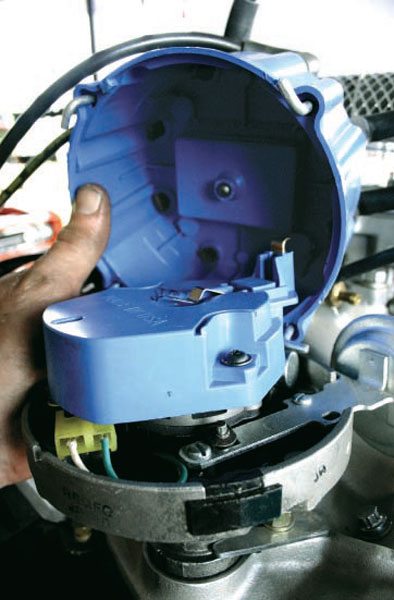 Typical mechanical distributor with vacuum advance. As vacuum increases, the phase of the rotor is adjusted by the arm on the right, increasing ignition advance. (Nate Tovey)

To compensate for engine load, many mechanical distributors incorporate a secondary adjustment from a vacuum diaphragm. This diaphragm employs an actuator rod that also shifts distributor shaft phasing relative to manifold pressure. Since lower loads exhibit increased vacuum, timing is advanced to compensate and increase performance. As load increases, the diaphragm returns to its static position, reducing timing to prevent detonation from excessive spark lead. This allows maximum WOT timing to be easily set with the vacuum line removed and better fuel economy and power at cruise and idle when vacuum is present. The drawback to the vacuum advance is the lack of adjustment range. Combinations with larger camshafts or certain intake manifold designs often render load adjustment based on the single vacuum source unreliable. This often has the tuner resorting to removing the vacuum reference to keep ignition advance more stable.

Ideally, there would be a way to accurately adjust the amount of spark advance versus speed and actual engine load. EFI systems give the calibrator the flexibility to make timing adjustments at more than one or two points.

Another adjustment that is often available, but admittedly more intrusive and messy, is changing camshaft timing. Advancing or retarding the camshaft relative to crankshaft angle can shift the tuning characteristics of the engine to allow greater efficiency at higher or lower speeds, respectively. Advancing the camshaft generally gives better low-end and midrange torque by closing the intake valve sooner, trapping the charge in the cylinder before it gets a chance to revert back into the intake port as the piston begins to ascend. Since most systems exhibit relatively little exhaust scavenging effect at lower speeds, opening the exhaust valve earlier also reduces static pumping losses by venting the high pressure more immediately to the exhaust system. 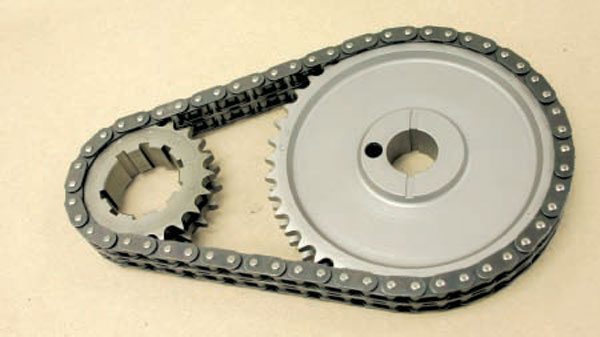 The timing chain links the camshaft (large gear) to the crankshaft (small gear) and determines the relative position. Most older engines do not allow for easy adjustment since the timing chain must be entirely removed to re-index the crank gear. (Nate Tovey) 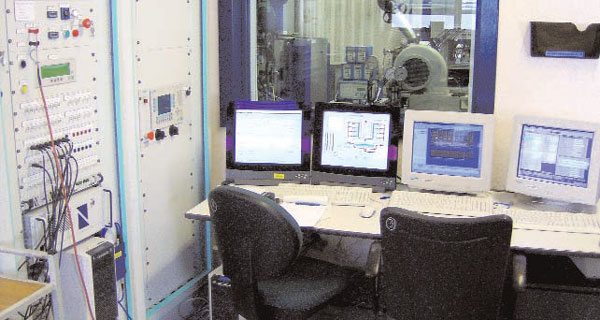 Most actual calibration work at the OEM level is done at engine dyno cells like the one shown here. Every possible engine parameter is carefully controlled and measured to ensure repeatability of the tests. 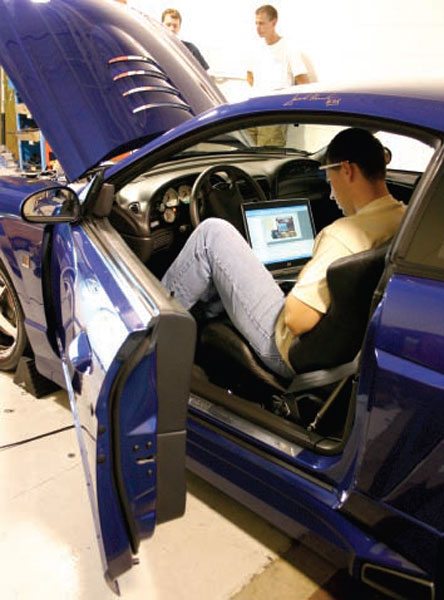 The addition of full electronic controls gives the calibrator much greater flexibility in the tuning process. What used to take hours of dirty work can now be accomplished in minutes with just a keyboard and the right software. (Nate Tovey)

The blue boxes in the foreground are signal processors for in-cylinder pressure measurements. The business end of a million-dollar production-level engine dyno can be seen in the background.

Likewise, retarding cam timing allows the intake valve to remain open later where the ram tuning effect can continue to pack air into the cylinder at the end of the intake stroke at higher speeds, making more power. As speeds increase and scavenging efficiency increases in the exhaust, larger volumes of gases can be extracted from the cylinder with a later valve closing. This leaves more empty volume for the intake charge to fill on the following cycle.

Getting at the camshaft drive gear usually involves removal of the front cover and accessory drive, which is usually less than practical during the tuning process on a working automobile. Since it is difficult to adjust cam timing, a compromise needs to be found that gives the best performance split. If the camshaft lobe positions could be altered with respect to speed and load, greater overall engine efficiency could be had without actually changing components.

Written by Greg Banish and Posted with Permission of CarTechBooks 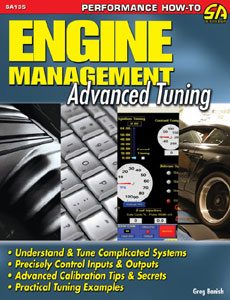 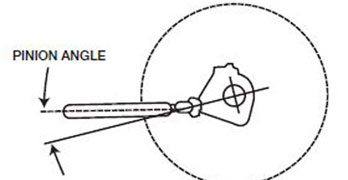 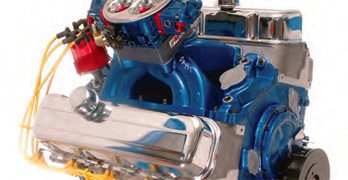 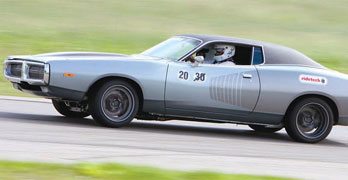 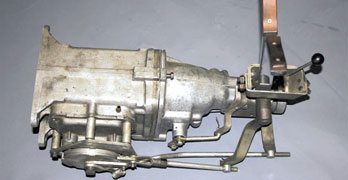 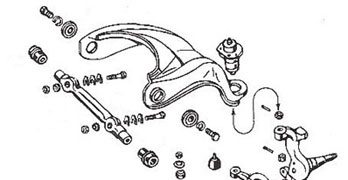 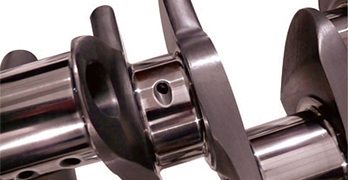 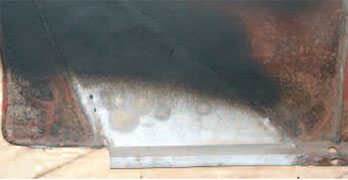 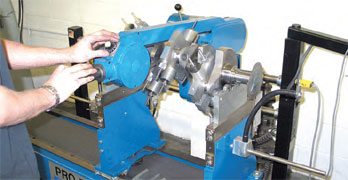 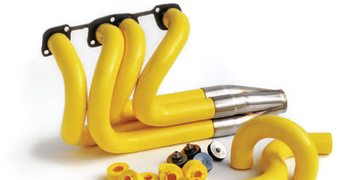