Although the focus of this book is manual transmissions, a transmission can be rendered useless without proper clutch performance. The premature failure of most synchronizers usually stems from some sort of clutch-related problem.

This Tech Tip is From the Full Book, AUTOMOTIVE WELDING: A PRACTICAL GUIDE. For a comprehensive guide on this entire subject you can visit this link:

On any given week, I get a few calls about some sort of shifting issue. I ask the question, “Do you know how the clutch works?” The replies could fill a few chapters and appear humorous to some people, but the most common reply is “No.”

You can think of the clutch as a simple on-and-off switch. Without it, the engine is connected to the transmission at all times. Power flow from the engine to the transmission would never be interrupted, and therefore, transmission gears and components would be loaded at all times. In order for a manualtransmission synchronizer to work properly, power flow has to be interrupted before and during the shift so that the synchronizer can work freely. This break in the power flow occurs when you press down on your clutch pedal. You turn the switch off.

Now the synchronizer can match gear speeds to the transmission output shaft with little effort. When this is accomplished, the shift is made, and power is reapplied by turning the switch on (lifting up on the clutch pedal).

Poor clutch release is the major cause of manual-transmission problems. Your on-and-off switch has become shorted. Frequent causes of poor release are simply not enough pedal travel or effective throw to cause a proper release.

The pilot bearing, or pilot bushing, is installed in your engine’s crankshaft. Its job is to keep the transmission input shaft concentric with the crankshaft centerline while allowing it to spin inside of it. 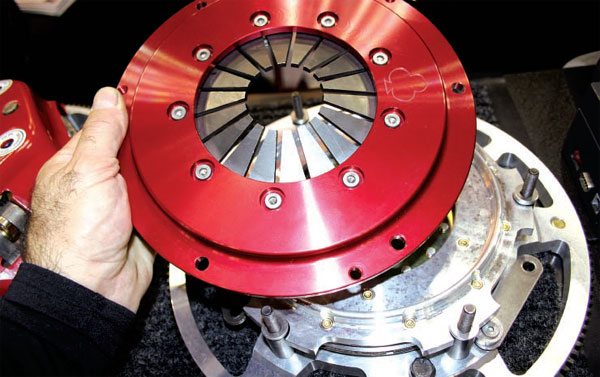 Offset dowels are often used to move the housing into spec. Most performance applications require run-out to be less than 0.008 inch while maintaining a parallel surface of 0.005 inch. If the housing is out of alignment, the transmission input shaft side loads and binds on the crankshaft pilot bearing, causing pilot bushing and front transmission bearing failure as well as clutch chatter and release issues.

The flywheel stores rotational energy. Heavy wheels may cause an engine to accelerate more slowly but allow smoother shifts because rpm does not fluctuate much. A lighter wheel may allow the engine to rev faster but may cause jerky off-theline clutch chatter because of RPM flutter.

Although most people don’t associate release bearings, or throw out bearings, with the flywheel, they should. The flywheel is what the clutch pressure plate fastens to. If the height of the flywheel changes, the whole clutch assembly moves either closer or farther away from the release bearing. This is what typically happens when purchasing an aftermarket flywheel or having an older wheel resurfaced. Release bearings have pretty much been hydraulically activated since the mid 1980s. Resurfacing a flywheel with a hydraulic release bearing that has no adjustment causes most release issues. Mechanical linkages often compensate for these issues.

At times it can be confusing as to what clutch you may need. Terms like “dual disc,” “dual friction,” “sprung hub,” and “unsprung hub” don’t make matters any easier.

I honestly don’t understand most of the marketing hype surrounding clutches because a single-disc, organic-lined, diaphragm clutch has been used in many highhorsepower applications with a great life factor for many years. So why all the new technology? 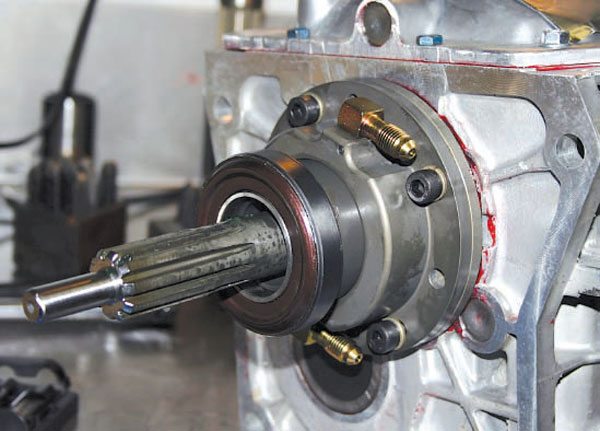 Here is a McLeod hydraulic assembly mounted to a custom T5. Note that the line fittings swivel to allow you to fish the lines through the bell housing. Switching pistons, which come in several lengths, changes the adjustment.

Here is a cutaway of a Tilton hydraulic release bearing that mounts inside of the bell housing. Spacing it out or machining the housing provides adjustment.

The pressure plate, which is basically a clamp, ideally should have enough holding force for the intended application, yet be as easy to apply as possible. A certain amount of slippage should be required to avoid a jerky or harsh engagement. Harsh engagement can also lead to drivetrain breakage. The bigger the diameter the more the holding power, but the larger the diameter the more rotating mass. The new technology makes lighter, smaller clutches with great holding power with the least amount of pedal effort.

Think of applying pressure to your chest with your finger as opposed to your hand. The finger applies the same pressure but with more pounds per square inch. It is easier to rotate your little finger compared to the whole palm with the same pressure behind it, so you would need more effortto keep your finger rotating than your whole palm. This is the principle behind the design of a dual-friction disc.

The full cutaway shows the bearing on the left against a triple-disc 7-inch-diameter racing clutch. 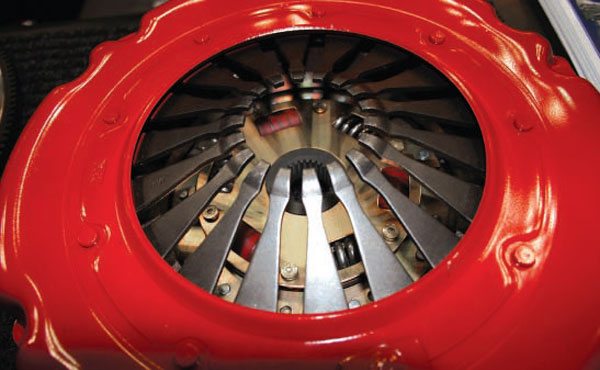 Most new clutch designs are based on a typical diaphragm clutch like this one. 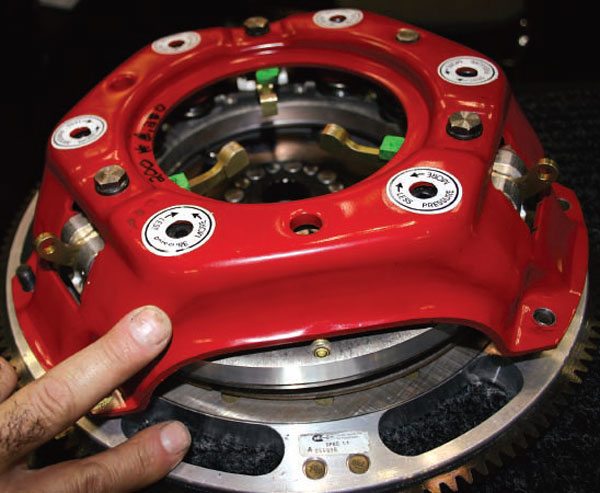 A Long-style clutch can be adjusted for more or less pressure.

The clutch drive plate will either be bolted or riveted to the lined surface. It is raised via stand offs to clear the sprung hub. The springs fit in the slots, which drive the plate. I’m removing the plate to expose the hub and springs.

Generally, a diaphragm clutch weighs less than a Long-style or Borg & Beck-style. Long and Borg & Beck clutches are also known as “3-finger” clutches because the diaphragm is both the lever and the spring. Borg & Beck and Long-style clutches use three levers that push against a spring-loaded plate with coil springs. The Borg & Beck is not adjustable, while the Long-style is. Pedal pressure is easier with a diaphragm because of the lever ratio of 10:1. A Borg & Beck has a typical ratio of 6:1 and the Long-style 4.8:1. Height is a consideration because, obviously, the taller the clutch the longer the transmission’s input shaft must be.

Clutch discs come in a wide variety of sizes, hubs, and linings. Most street applications have clutch discs that absorb initial shock in two ways. The first is the drive hub, which is driven by springs. The second is the surface of the lining, which is bonded to a wavy spring-steel surface commonly called a marcel.

People often have a hard time telling if a pilot bushing, throw-out bearing, or clutch is bad. In most applications (other than a Longstyle), you cannot adjust for a slipping clutch. No external adjustment is going to help. The best method for adjusting correct release is to measure clutch release with a feeler gauge. 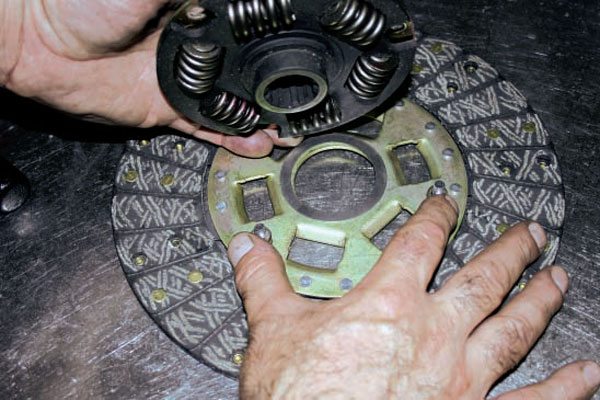 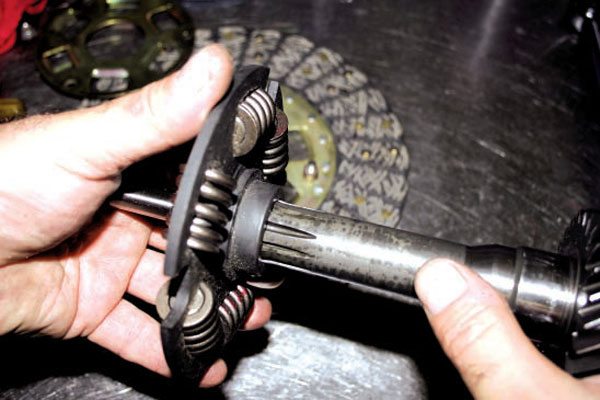 Here is the sprung hub on a transmission input shaft. This simple visual can give you a better idea of how power flow is put through a clutch system. 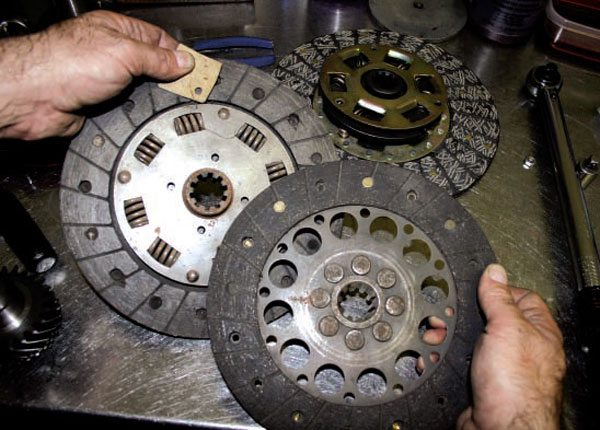 Here are some Ferrari racing clutches. The one on the right is a solid clutch with no marcel and no springs. The hub is riveted solid to the lining.

The organic side of a dual-friction disc with polyencapsulated springs

The Kevlar side of a dual-friction disc offers aggressive performance that’s tame enough for street use. 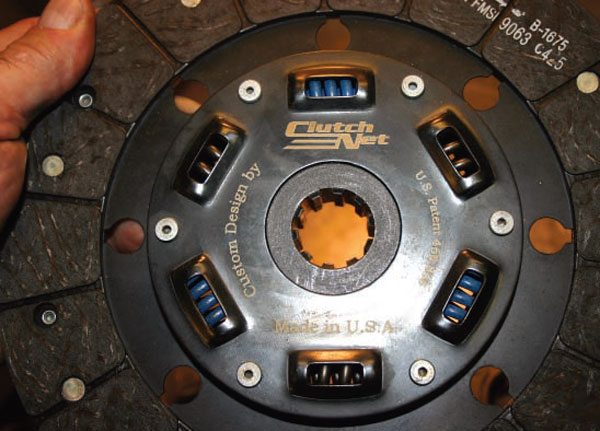 The McLeod modular bellhousing allows for indicating the housing within itself because the mounting surface of the bellhousing is a separate component.

A Chevy bronze pilot bushing is on the left, and a factory roller-style pilot bearing is on the right. The needle-style bearing is less forgiving when a misalignment exists and can make a mess out of a crankshaft or input shaft if it fails. 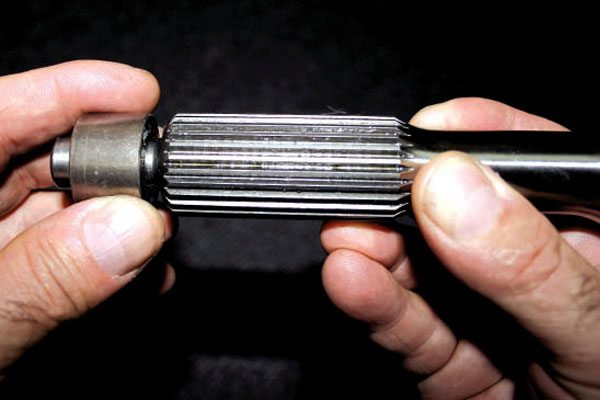 Here is how a pilot bushing supports your input shaft. The correct support of this bushing and fit of a driveshaft yoke in the tail bushing are what keep things aligned.

A typical, good release is 0.040 inch. Some bell housings have a lower inspection cover. You can usually place a feeler gauge between the flywheel and disc to get a measurement. This method is very accurate. Some people adjust a clutch by setting the amount of free play the pedal has before allowing the release bearing to make contact with the clutch. Using this method to adjust the clutch is actually the numberone cause of poor-release issues.

A quick down-and-dirty way to check for clutch release is to simply get the car good and warm so all components are heated and expanded. Press down on the clutch pedal and count to 10. Within 10 seconds the transmission should slow on its own. Most transmissions (the ones discussed in this book, anyway) have an unsynchronized reverse. If you try to put the transmission into reverse after the 10-second wait and the gears grind or clash, the transmission is still turning and has not been decoupled from the engine.

Written by Paul Cangialosi and Posted with Permission of CarTechBooks 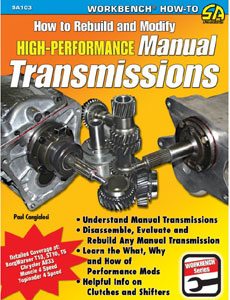 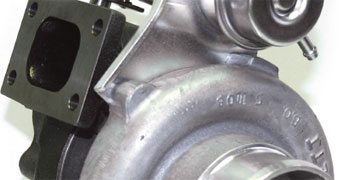 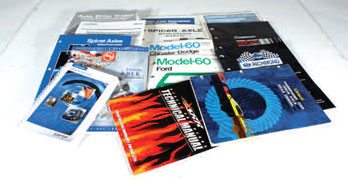 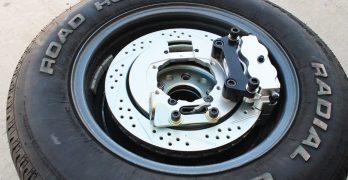 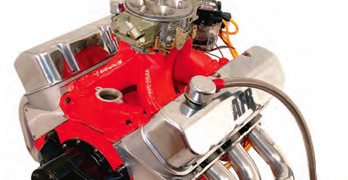 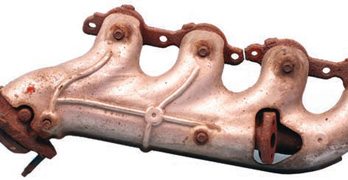 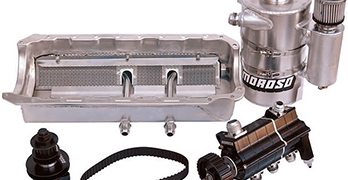